The Avengers: Endgame – Winter Soldier Battle Diorama Series 1/10 Scale Statue has been fully revealed by Iron Studios. The statue features Bucky Barnes atop a destroyed Avengers HQ base, and stands a little over 8″ tall. It’s part of the massive Avengers: Endgame Battle Diorama Series, and will link up to the previously announced statue for a larger battle scene. It’s priced at $99.99, with a release set between January and March of 2020. Pre-order at the link below, and see the new photos after the jump. 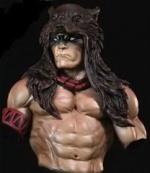