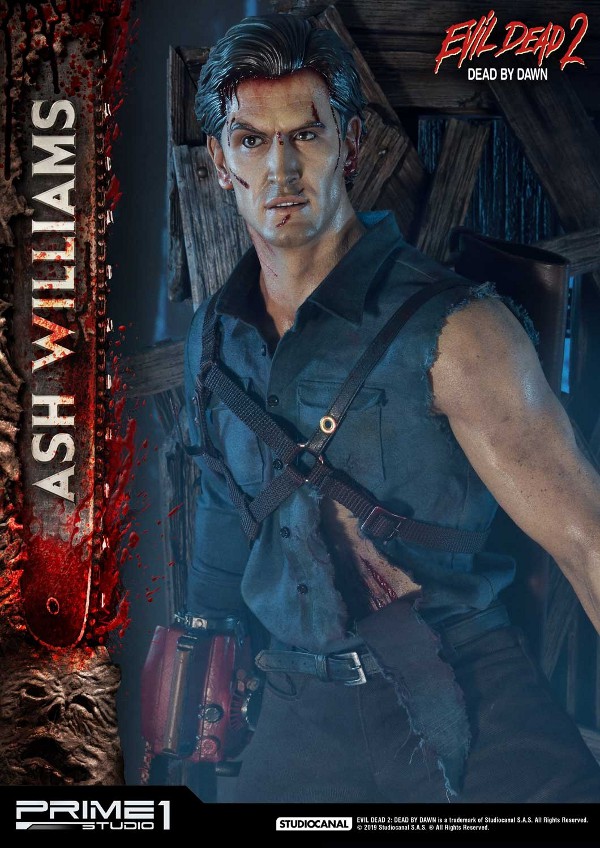 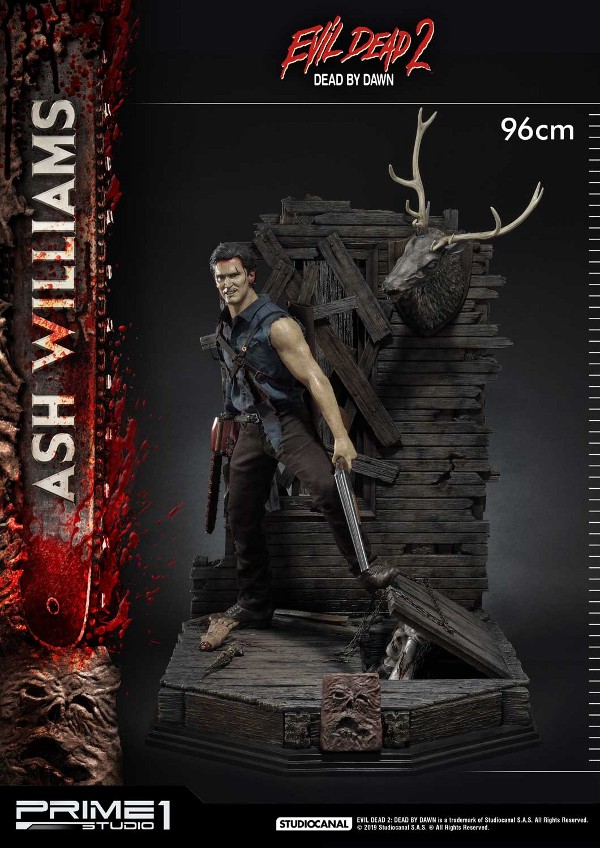 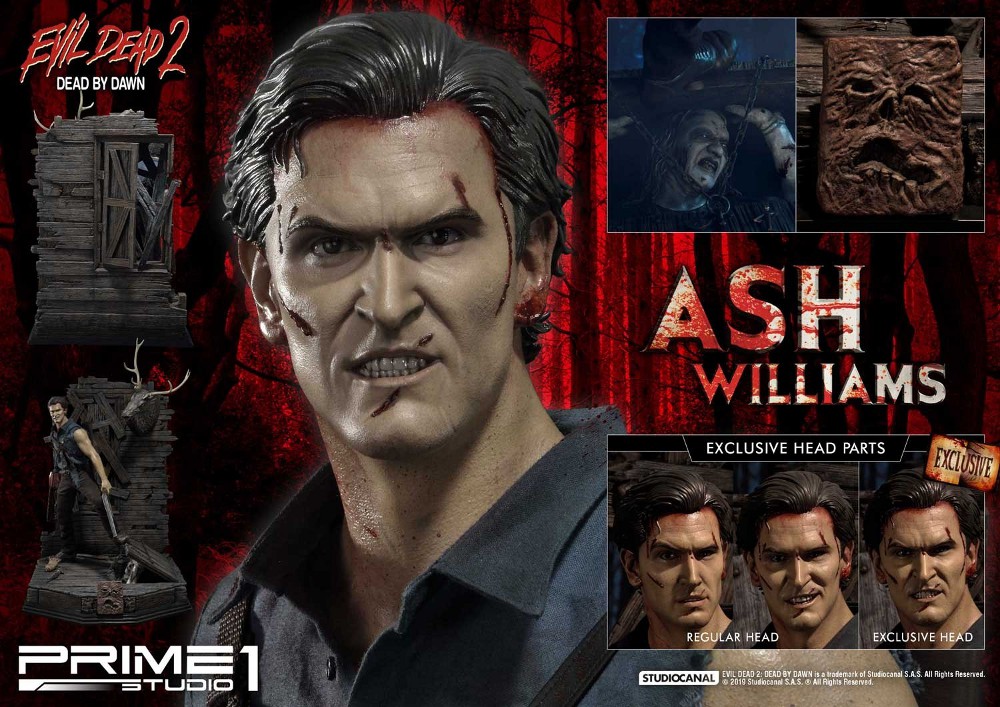 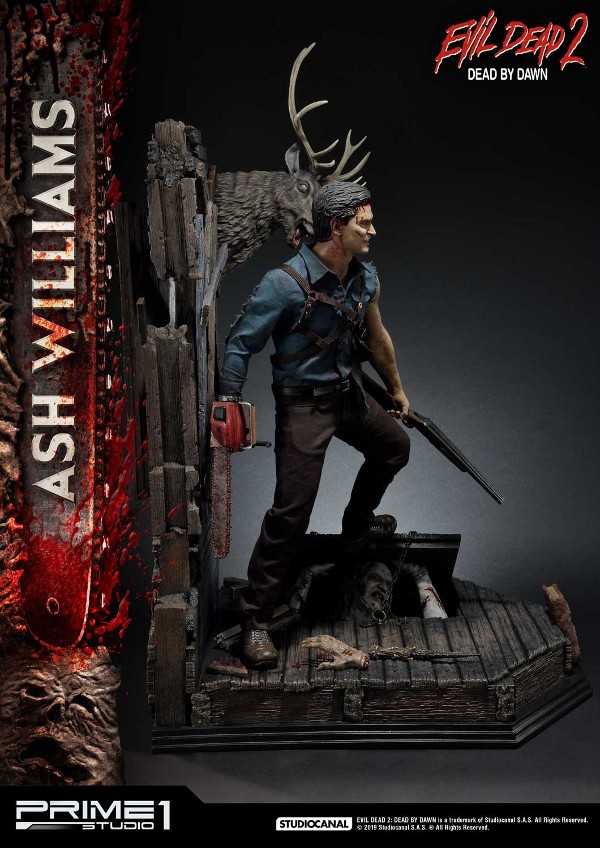 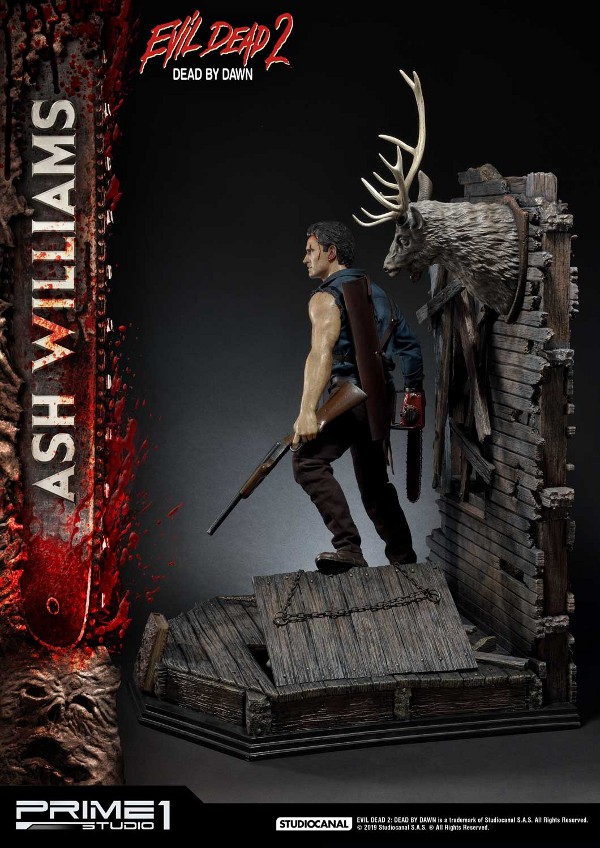 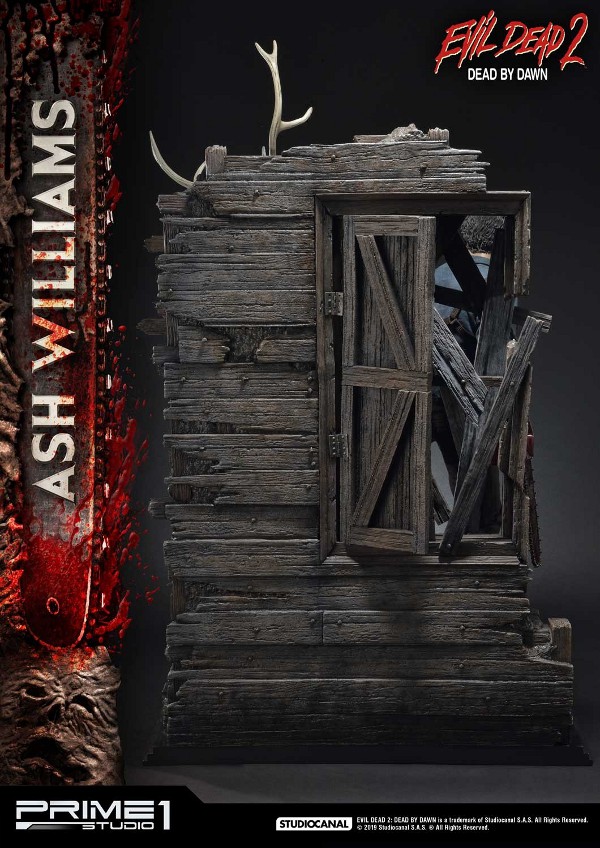 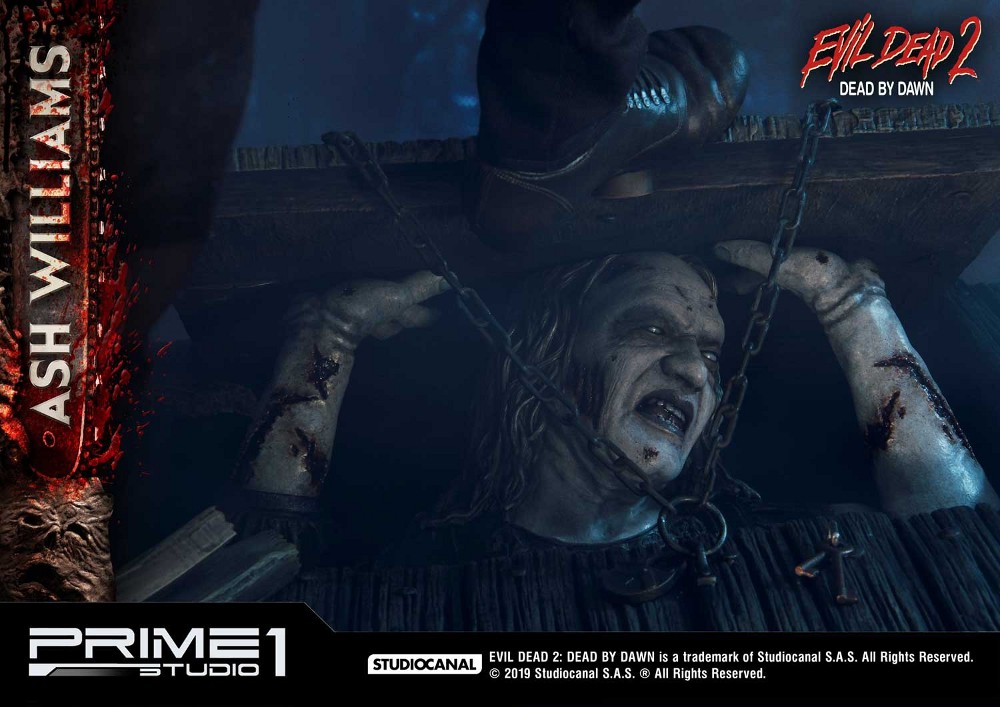 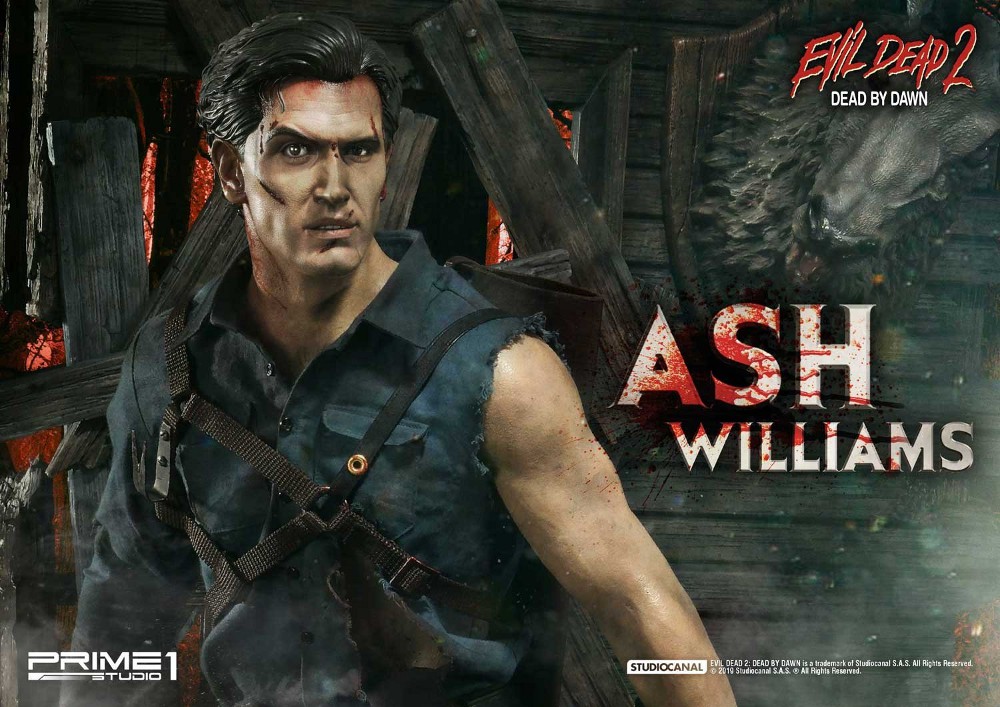 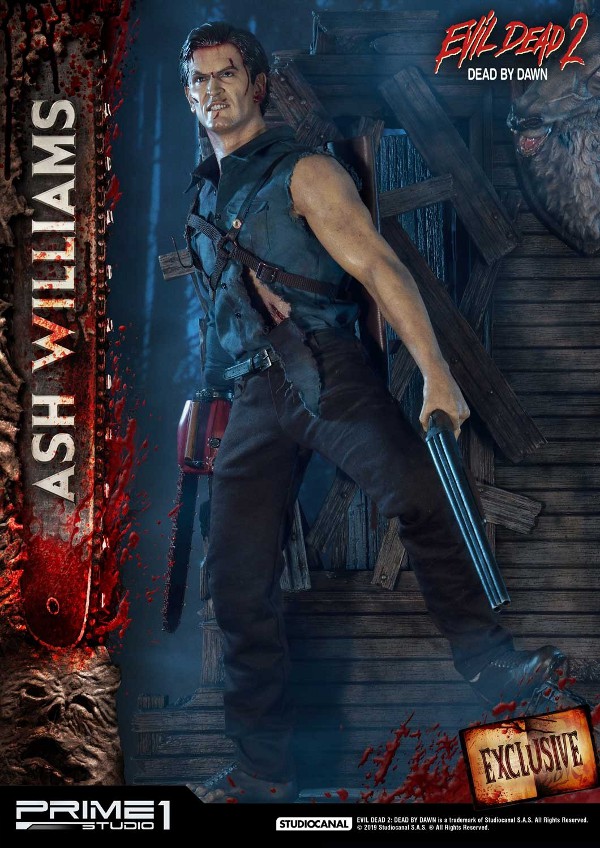 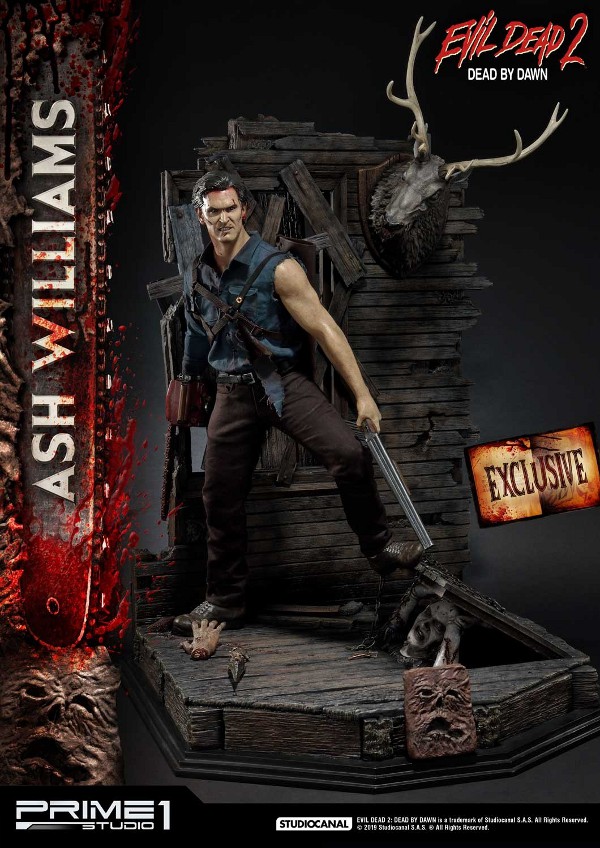 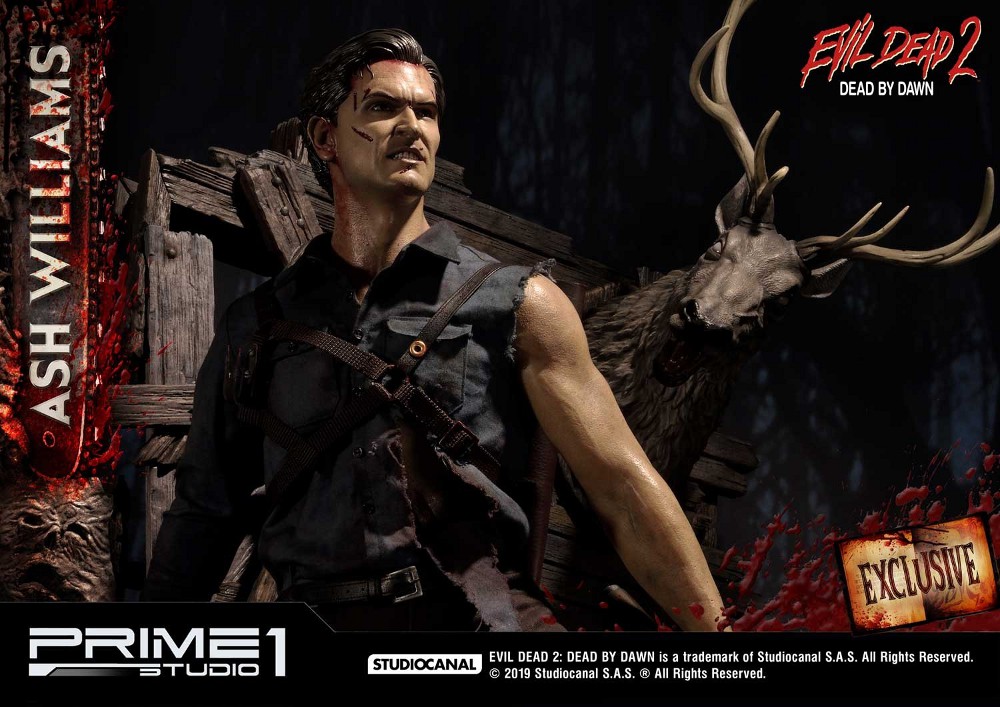 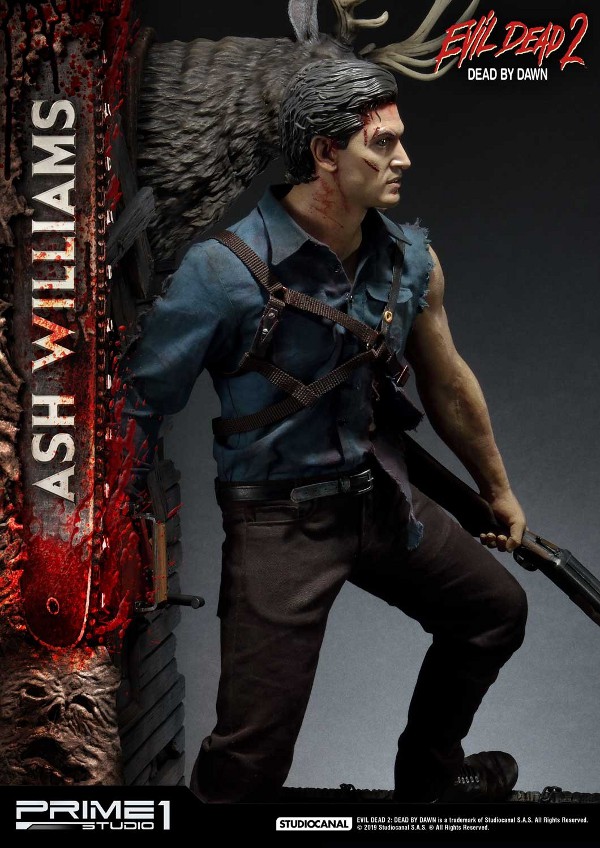 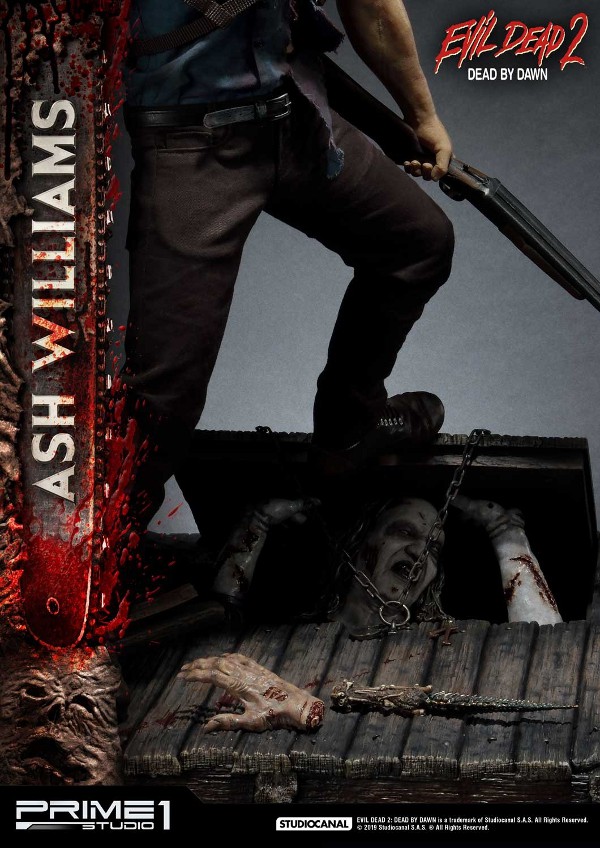 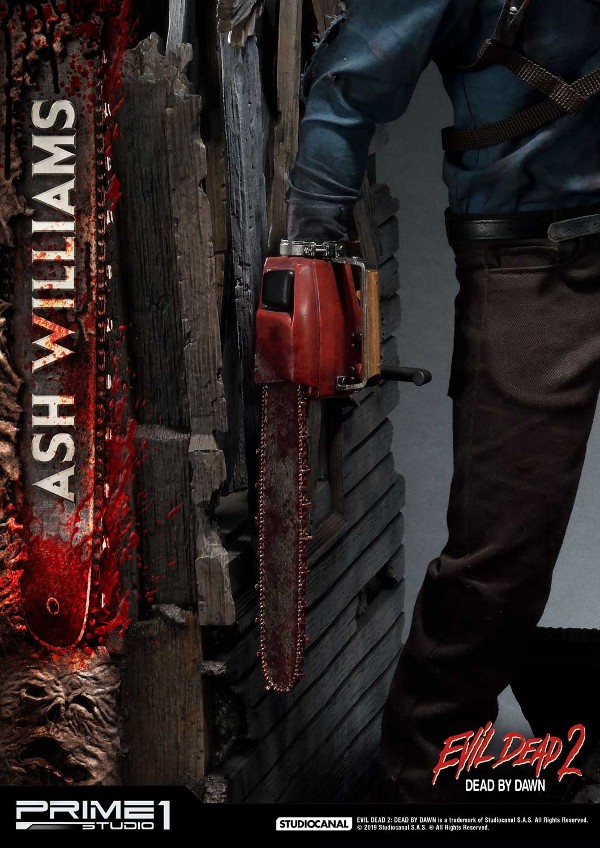 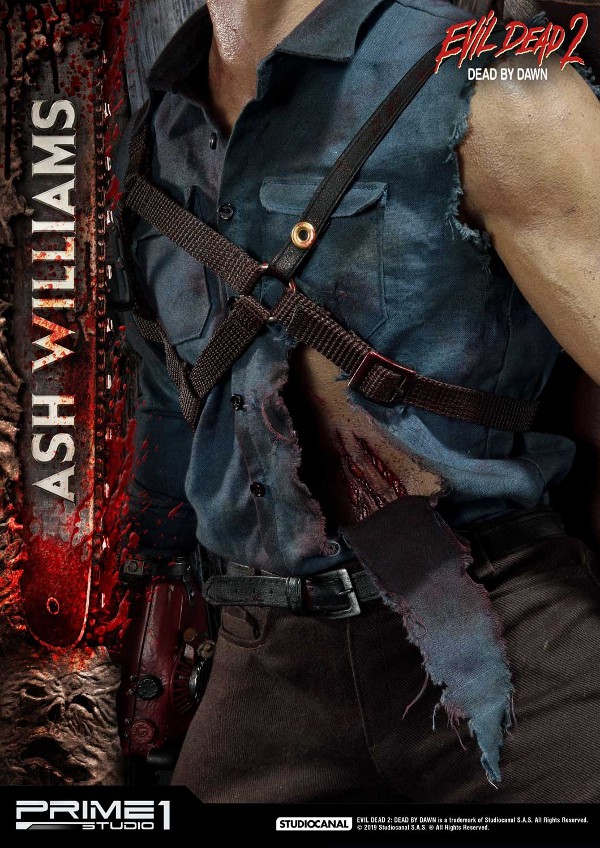 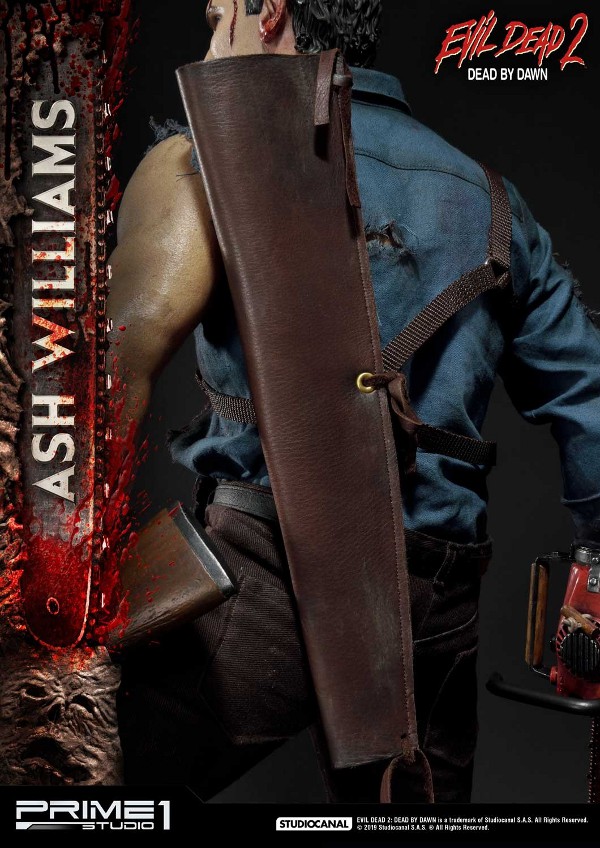 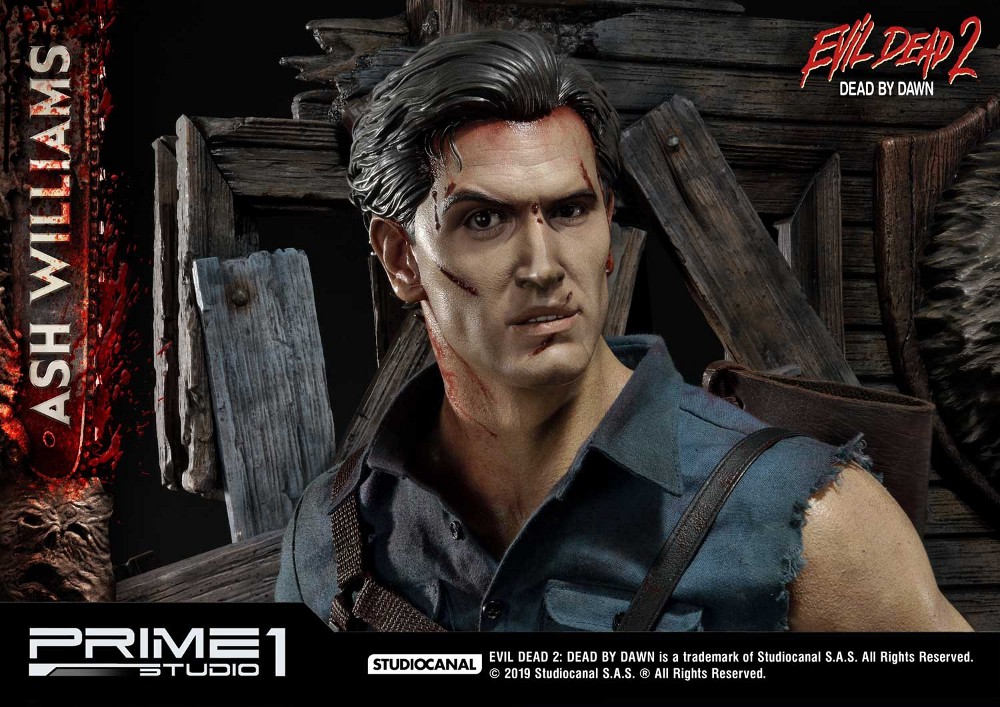 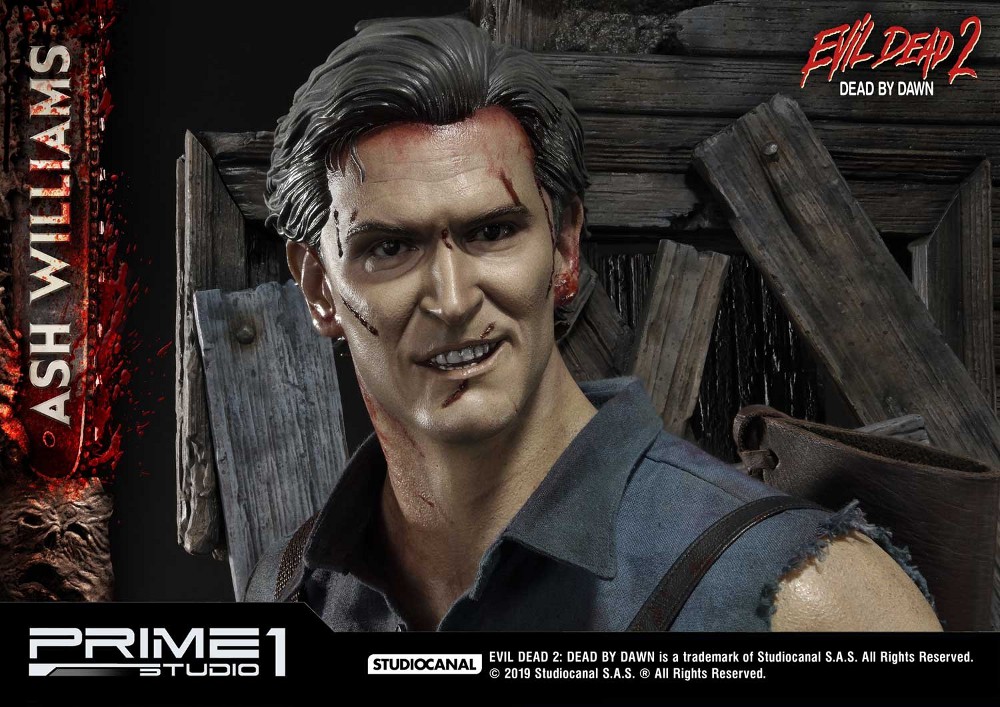 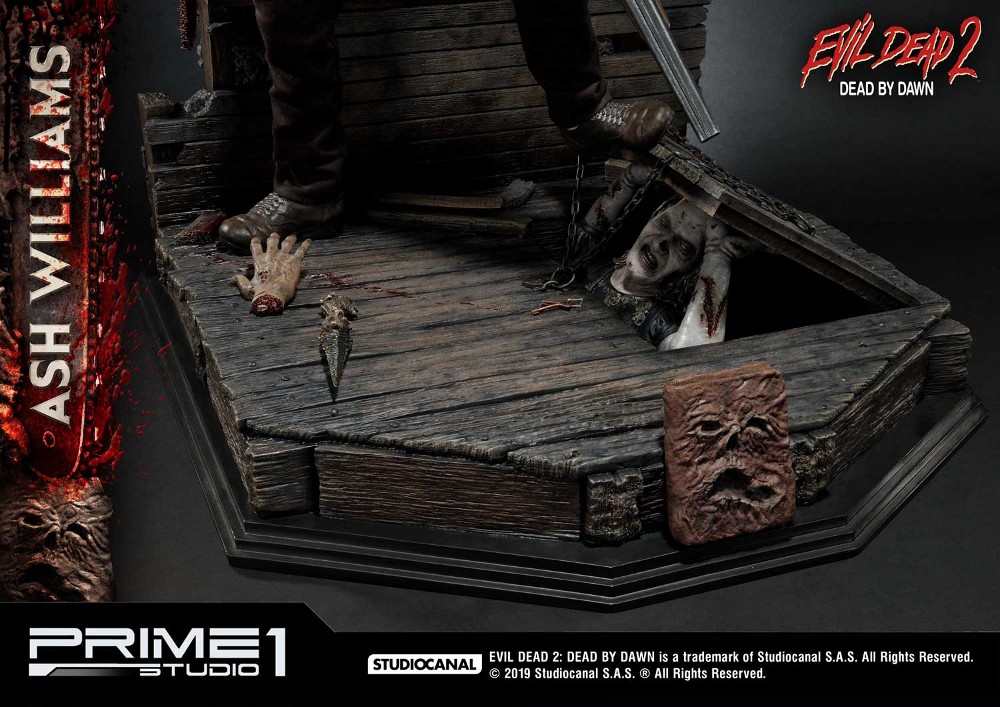 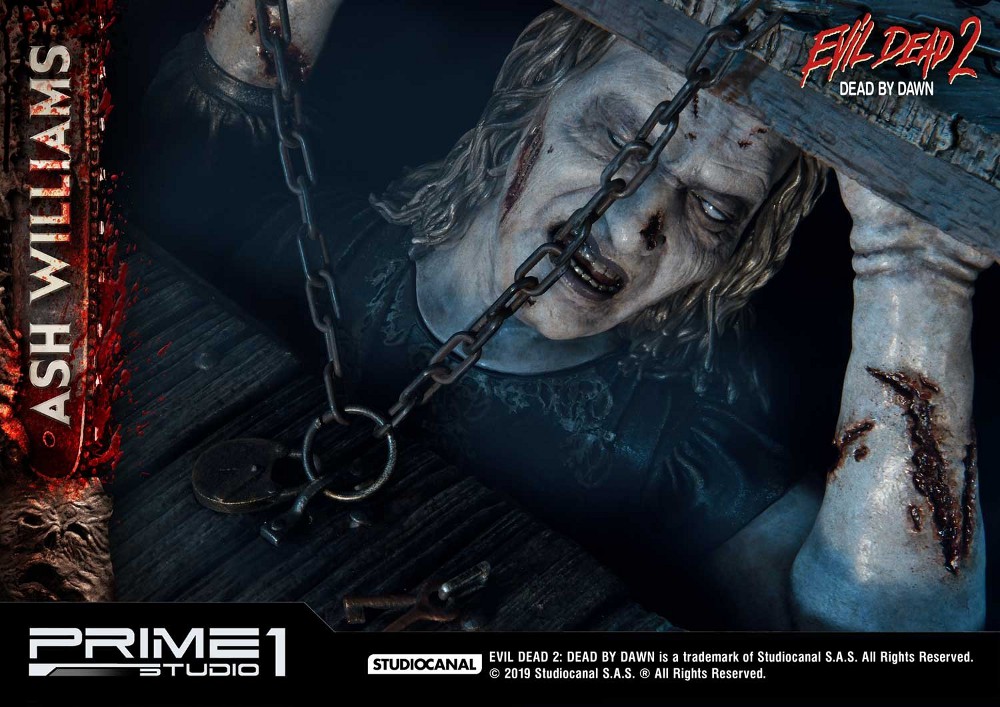 Informations
Prix de sortie:1499$
Date de sortie: 2020
Nombre d'exemplaire:TBD
Dimensions:(H):96cm (W):60.5cm (D):67.6cm
Poids:TBD
Artistes:TBD
Prime 1 Studio has opened up pre-orders for their upcoming Evil Dead 2 – Ash Williams 1/3 Scale Statue. The statue stands at 38″ tall. The statue features a full diorama base, themed after the cabin in the woods from the film. The dio features the haunted deer head, and Henrietta popping up from the basement. Ash is portrayed with a boom stick in one hand, and a chainsaw in place of the other. Ash will include a set of interchangeable portraits. Prime 1 will have an Exclusive Version with an additional portrait. The statues are due for release between June and August of 2020. Click the links below to order, and see the photos after the jump.

Museum Masterline Evil Dead 2: Dead By Dawn (Film) Ash Williams – $1,449
Museum Masterline Evil Dead 2: Dead By Dawn (Film) Ash Williams EX Version – $1,499
Prime 1 Studio is proud to present 1:3 scale MMED2-01: Ash Williams statue from Evil Dead 2: Dead by Dawn. Ashley Joanna Williams also known as Ash is the anti-hero protagonist of the Evil Dead series, played by Bruce Campbell, and created by director Sam Raimi. Ash is one of the few non-monster characters in the “Horror” genre to have such notoriety and most easily recognized based on his final iconic appearance armed with a sawed-off double barrel shotgun and a chainsaw strapped to the stump on his right arm where his hand once was. Capturing the likeness and details of Bruce Campbell, this Museum Masterline 1:3 scale statue of Ash Williams comes with an additional alternate portrait stepping on a trap door with Henrietta trying to escape from the cabin cellar floor. The Exclusive version of MMED2-01EX: Ash Williams includes an extra alternate exclusive portrait. Evil Dead fans don’t miss your chance to own Ash with his infamous chainsaw and his sawed-off double barrel shotgun!
Specifications:
– Statue Size approximately 38 inches tall [(H):96cm (W):60.5cm (D):67.6cm]
– One (1) designed theme base
– Two (2) alternate Portrait
– One (1) Alternate Exclusive Portrait (In the Exclusive Version Only) 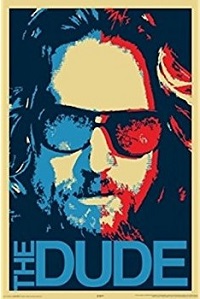