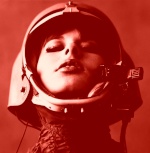 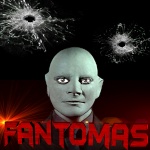 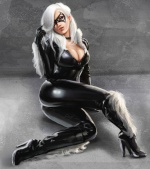 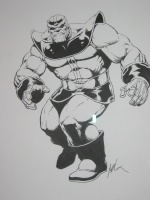 [Vous devez être inscrit et connecté pour voir cette image]
Let me tell you some facts about a man named Sheldon Moldoff, who died Wednesday night at the age of 91 due to kidney failure…

Sheldon “Shelly” Moldoff was born in New York City on April 14, 1920. A self-taught artist, he was encouraged in his work by comic book illustrator Bernard Baily, who lived in the same apartment house as the Moldoff family. He was 17 when he broke into professional comic book work, selling filler pages to Vincent Sullivan, the editor at Detective Comics, Inc. The page for Action Comics #1 may have been his first sale or publication, though there were others at about the same time.

Shelly was much in demand throughout the forties, working for DC on many strips. One of his favorites was one he created — The Black Pirate, featured in Action Comics. In 1953, he became Bob Kane’s main ghost and I guess I need to explain that working arrangement…

Kane never drew Batman on his own. He was not by nature an adventure artist — funny animals were more his style — nor was he the kind of cartoonist who liked to sit at the drawing board all day and night. When he started producing Batman for Detective Comics, he adopted the modus operandi that was common for newspaper strip creators of the day, which was to hire on one or more assistants. It was also not uncommon for the assistants on a strip to do most or all of the work. Moldoff was apparently Kane’s first assistant on Batman, then he left and was replaced soon after by Jerry Robinson…though the first year of Batman stories also show indicators of other hands.

As Batman became more popular, the feature got its own comic plus a newspaper strip was added as well as a Batman feature in World’s Finest Comics. Though Kane took on more assistants, the company’s needs for Batman tales exceeded what he and his team could produce so stories were commissioned by DC editors and as per the terms of Kane’s deal with DC, all were signed “Bob Kane.” Artists like Jim Mooney, Dick Sprang, Winslow Mortimer and Curt Swan were Bob Kane ghosts in the sense that the drew comics that were signed as if Kane has drawn them. But none of those men worked for or even dealt with Kane. Jerry Robinson, George Roussos and others did work for Kane though they later began working for DC on their own.

Around 1946, Kane renegotiated his deal with DC. Under the new contract, DC would continue to commission Batman stories by others (all signed “Bob Kane”) and Kane would produce X number of penciled Batman pages, drawing up scripts purchased by DC editors. The fee he was paid for this was so high that Kane could hire someone else to do the work, pay them low-end going rates for the industry, and live very well off what was left over. For several years, an artist named Lew Sayre Schwartz did somewhere between 80% and 100% of the work Kane handed in under this arrangement. When Schwartz moved on to other work in ’53, Kane offered the position to Shelly Moldoff, who accepted. At first, Kane seems to have done a little art-editing on the pages, occasionally redrawing a shot of Batman or Robin. Before long, he went from doing almost none of the work to doing none of the work. Sheldon Moldoff did it all.

There is some dispute as to whether the editors up at DC knew that Shelly Moldoff was the guy drawing what Kane handed in. They definitely knew that the work was ghosted but Shelly told me they had no idea he was the ghost. He was also working for DC at the time, mainly as an inker. From time to time, they’d say, “Shelly, we have another Bob Kane story for you to ink” and they’d give him a story he’d penciled for Kane. Others who were around DC at the time said, “Naw, everyone knew Kane’s work was being ghosted by Shelly.”

Moldoff was still ghosting Kane’s work in 1964 when due to declining sales, DC decided to upgrade the look of the Batman strip, getting rid of the cartoony Kane/Moldoff style and making it more realistic. Moldoff did his best to draw in the new approach but it took a lot of work by the strip’s newly-assigned inkers, Joe Giella and Sid Greene, to make it look more contemporary. For that reason but mostly because Kane had become difficult to deal with, DC decided to change the working relationship. In ’67, Kane’s deal was renegotiated. They gave him a lot of money and he no longer had to pretend to produce pages for them…which put Shelly Moldoff out of a job. At first, he had another gig — working on a cartoon show called Courageous Cat and Minute Mouse that Kane had sold — and he still had some assignments of his own from DC. But then the cartoon work dried up and some new management at DC decided his art was “old-fashioned” and that ended. He worked on and off in advertising and animation after that.

Then came the comic convention circuit. In the eighties, a Las Vegas cab driver/comic fan named Dave Siegel made contact with Shelly and arranged an invite to the Comic-Con International in San Diego. Shelly was swamped with admirers who wanted to meet him. Many wanted to purchase re-creations he did of his classic covers. I asked him once which one was most requested and he thought for a moment then said, “Lately, anything with Bat-Mite on it.” He designed that and many other well-known characters. Dave did a wonderful thing for Shelly by getting him to conventions…and a wonderful thing for so many of us who enjoyed meeting him and getting to know the guy.
Red Rocket 64 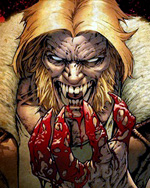